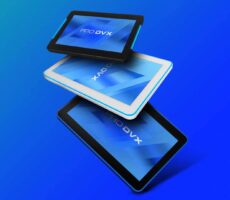 View all markets
Menu
Back to overview

Den Bosch, The Netherlands – 13 August, 2019 – ProDVX Europe was named the winner of a Bronze Stevie® Award in the Innovation of the Year, Business Products Industries category at the 16th Annual International Business Awards® today. ProDVX Europe won the award for its 10 inch Android SOC Touch Display with Surround LED Bar, the APPC-10SLB.

Focus on Innovation
“We are very proud of winning this award. Translating market demands into new and innovative products for digital signage like the APPC-10SLB really is an important focus for us, so we are very happy being rewarded with an Innovation of the Year award”, says Dirk Sliedrecht, director at ProDVX. The International Business Awards are the world’s premier business awards program. The 2019 IBAs received entries from organizations in 74 nations and territories with a record total of more than 4,000 nominations.

Jury verdict
ProDVX Europe’s APPC-10SLB was named the winner of a Bronze Stevie® Award in the Innovation of the Year, Business Products Industries category due to “outstanding understanding of the need to build flexibility into new technology to make it have greater value”, as was stated by the well-respected judges. Stevie Award winners were determined by the average scores of more than 250 executives worldwide who participated in the judging process from May through early August.